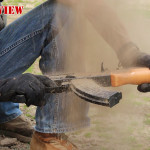 We are kicking off 2015 season with review of Century Arms RAS47 – this is their stamped receiver version, modeled on AK rifles. Our testing has evolved for this season. Sand test is a setup for failure – EVERY rifle will fail. We just want to see how far every test subject can be take it with this. RAS47 best score was 3 rounds down the range. Now, drop test was different. We have redone this test to give it the rifle best shot and we had the same failure. Also, before going to drop test and “swim test”, we made sure that rifle was cycling…now, it is possible that sand was hidden somewhere in the receiver. But what you don’t see on video, is that RAS took swim test 3 times and all 3 times it caused a jam. Again, it was 100% operational before swim test. Swim test failures were: FTF (twice) and FTE.

Support Union! Shop for AK accessories from our Union Store!

71 thoughts on “BAD and GOOD – RAS47 Review – American made AK under the pressure!”