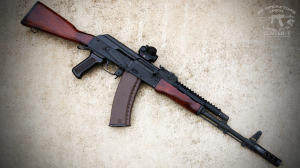 Look at this rifle in picture on the left, looks like a decent Bulgarian AK74 clone, right? WRONG!!! It is complete piece of shit! But let me start from the begging, some time ago I have received that AK74 clone made by one of “mass makers” – it supposed to be our “Union Duty” AK, but right off the bat something was not right with it. Rifle was keyholing and it didn’t feel right. So immediately that AK was taken away from “line of duty” and I have used it mainly for pictures. Finally time has come and I could get back to that AK and make him useful again. One of my good friends volunteered to help me with this project. “Bulgarian 74” was taken apart and look what we have found inside…
Basically, the barrel journal was undersized and the barrel was “knurled” to make it fit along with an extremely over sized pin which was almost cut into the chamber, you can see in the pics that the barrel pin hole was drilled to almost .320. Now please remember that .305 is the maximum allowable for it to be in spec…. 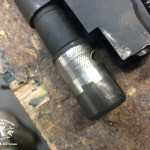 Due to the over drilling of the barrel pin hole the front trunnion needs to be replaced as it is not safe to weld up and re-drill. So the trunnion was pulled out and we found that not only were the wrong sized and type rivets used but they were not even dimpled for structural strength…All this is simple invisible to the eye, unless you pull the gun apart…I understand that not everyone can afford high quality AK, but I’m speechless with stuff like this. 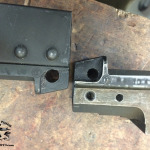 I’m not going to drop any names here, because I don’t want to hurt people who were acting in the good faith, but I want to bring this to the light to put some things into the perspective. I know that some of you would like to have AK and don’t want to spend serious money on it, but please understand, that when you are buying these mass produced “AKs”, most of the makers will cut corners. They will “make parts fit” no matter what, they don’t care about specs, correct rivets and etc…I know that it is hard to fight the “urge” of owing new AK (right?). But please, as you can see, some of these atrocities aren’t event visible without completely disassembling the rifle, which is impossible when you are going to buy it…think about it before purchasing that new “budget” AK…So please, Don’t Buy Junk AKs!
– Rob Ski